Trials were conducted within the Campden BRI aerobiology laboratory to determine the efficacy of HyGenikx towards airborne Phi6 - a recognised SARS-CoV-2 surrogate (the coronavirus that causes COVID-19). Results show the air and surface sanitisation system removes up to 99.99% of the airborne COVID-19 surrogate in under 3 hours.

Method. Phi6 Pseudomonas syringae phage is an enveloped RNA virus* used as a surrogate for coronavirus and influenza. Phi6 was nebulised into an aerobiology test chamber to represent heavily contaminated air. Air samples were then taken every 20 minutes for a period of 3 hours, to determine levels of Phi6 in the air. This was performed in paired trials – with the HyGenikx unit turned off as a control, and with the HyGenikx unit turned on. The efficacy of the systems was determined by calculating both log reductions† of the test run compared to the control run and Decimal reduction (D) values, which is the time it takes to achieve a 1-log reduction. 6 sets of trials were completed, and the average was reported as a result.

Results. The level of Phi6 in the air decreased in all trials. The D value achieved ranged from between 19 minutes and 60 minutes and the test samples showed log reductions of up to >4.1 (where the levels of virus are no longer detectable) when compared to equivalent control samples. An average of 4 log reduction was reported – with HyGenikx removing up to 99.99% of the airborne COVID-19 surrogate in under 3 hours.

Conclusion. HyGenikx is effective at reducing airborne RNA viruses, including the SARS-CoV-2 surrogate (the coronavirus that causes COVID-19).

These results, Mechline believe, are an industry first, making HyGenikx Air and Surface Sanitisation System the most effective product of this type on the market. 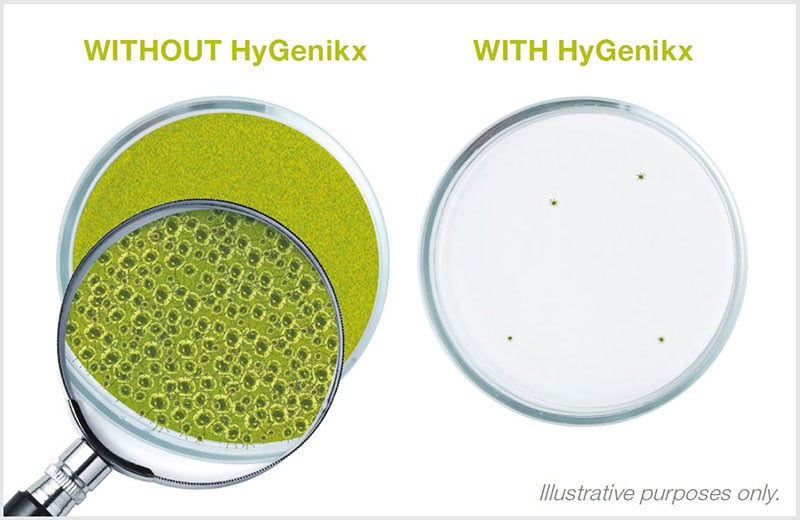 N.B. Since this statement was made in March 2020, HyGenikx has been tested against a suitable surrogate for SARS-CoV-19. See results above.

Dr Webber has a background of over 45 years in microbiology (including 16 years at U.C. Swansea, 18 years as Microbiologist with Fospur/Ashland, and 18 years as Technical Director of Microbial Innovations Limited).

HyGenikx units have been shown to kill a wide range of microbes that are more difficult to eradicate than viruses, including bacterial species that produce endospores (Clostridium difficile, Geobacillus stearothermophilus), Gram-positive bacteria (Staphylococcus aureus, MRSA, S. epidermidis, Listeria monocytogenes and L. innocua), Gram-negative bacteria (Escherichia coli and Pseudomonas aeruginosa), and moulds (Aspergillus fumigatus) in both the air and/or on surfaces.

HyGenikx technology has been tested against MS-2 coliphage (a surrogate for Norovirus), and achieved significant reductions in counts in both air samples and on surfaces. MS-2 is a non-enveloped virus which is more difficult to kill than the lipid-enveloped SARS-CoV-2.

SARS-CoV-2 belongs to the same group of viruses that cause colds and influenza. The use of similar technology in call centres and offices at an NHS Trust has been shown to reduce the incidence of illness-related absences; particularly reported cases of colds, coughs and influenza, as well as reducing other chest and respiratory problems.

Without testing HyGenikx against SARS-CoV-2 (or a suitable surrogate) we cannot categorically state that we can kill this coronavirus: however there is a great deal of scientific evidence that this technology can kill a wide range of other microbes that are much more difficult to eradicate than SARS-CoV-2.

ALS Laboratories is the UK's leading provider of food and drink testing services, with over 20 years experience.

In an independent validation study the effect of HyGenikx technology on harmful Listeria species, one of which—listeria monocytogenes—is a bacterial pathogen and widely associated with foodborne outbreaks.

Method. Sterile surfaces were inoculated with Listeria monocytogenes and Listeria innocua, left to dry, and stored in a cold room at 1±1°C for four days, where bacteria were measured daily. This was performed in the presence and absence of HyGenikx technology.

An ATP (adenosine triphosphate) meter is an accepted measure of cleanliness. ATP is an energy molecule found in all plant, animal and microbial cells. Its detection shows the presence of biological material that is not visible to the naked eye. An increase in biological residues (or dirt!) increases the amount of ATP present on that surface, making ATP an effective marker for the assessment of the hygienic status of an environmental surface.

In an undisclosed gastropub, ATP swabs were taken before and after the installation of HyGenikx to establish its impact on cleanliness. Specifically, testing focused on “unseen” dirt, i.e. not in the most obvious locations.

Method. The kitchen studied was clean prior to testing, as per their normal procedure. Swabs were taken from various locations, ranging from the edge of the fridge door and underside of shelving, to the rear of the hand basin and double plug socket – many of which are considered hard to reach or challenging areas. The areas swabbed measured 10cm x 10cm where possible.

Results. The results showed that readings were generally very low, even before the installation of HyGenikx, as the gastropub had a very clean kitchen to begin with! The readings from a week after installation however, showed that there was reduction in ATP at nearly every point tested, ranging from 12 to 100% reductions.

Conclusion. HyGenikx was successful in improving cleanliness, to levels not achieved with standard cleaning methods.

ALS Laboratories is the UK's leading provider of food and drink testing services, with over 20 years experience.

In an independent validation study, HyGenikx was assessed on its ability to prolong the shelf-life of produce stored in a cold room, as well as its ability to improve environmental conditions.

Method. The project was structured in two phases, identical in all aspects except for the introduction of the HyGenikx unit at the beginning of the second phase. 11 food items were trialled, all selected on the basis that they were considered “high risk”. These were: Asparagus Spears, Broccoli, Cherries, Cherry Tomatoes, Chestnut Mushrooms, Cucumber, Grapes, Green Beans, Peach, Raspberries and Strawberries. Care was taken to ensure that comparable products were selected for both phases, with variables such as shelf-life, weight, transport method and handling all as similar as possible. In both phases, the food samples were stored in a cold store at 5±1°C, for 31 days and assessed on when they were deemed to have passed their saleable shelf-life. This was established using visual testing based on objective criteria, which included visible mould/growth, detectable spoilage (appearance or smell) and whether the item would be considered acceptable to buy or not. Swabs and air plates were also used to monitor the environment of the cold store.

Conclusion. HyGenikx was proven effective at achieving a longer shelf-life for the chosen fruit and vegetables and improving environmental conditions in a cold store during the trial.

Crucially, these results were achieved in a simulated working environment cold store - which provide as close to "real world results" as possible. Principally, fruit and vegetable life and quality can be significantly extended, and environments improved, with the installation of HyGenikx.

HyGenikx is certified for UKCA and CE

A very small volume of ozone is released as a by-product of the combination of technologies used. This unique combination of technologies is guaranteed to both achieve results and be completely safe in operation. In every case the ozone levels present fall well below the lowest international safety levels worldwide (World Health Organization - 0.05ppm), as stipulated by EUOTA. This has been verified for all unit variations with independent laboratory testing carried out by “Odournet”.

To view listing go to Intertek Directory and search by relevant MODEL NUMBER.